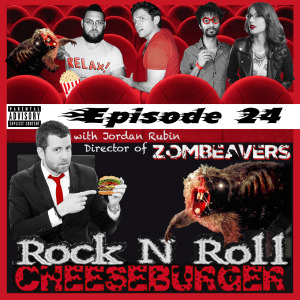 Jordan Rubin, hilarious Writer / Director of “Zombeavers” drops in for a beaveburger.

Rock N Roll Cheeseburger Episode 24!  Jordan Rubin, writer & director of the horror / comedy film Zombeavers gets his beave on in burgerville this week.  We go round table on such pressing issues in society as Facing Danger,  Primal Behaviors,  Mom Strength,  and  Deforestation.  We are sponsored this week by the fine folks over at Power Snack.  Our comedy sketch involves martians, marijuana and a guy named Morty.  And we rock rad tune buggies from the band Reuben with “Freddy Kreuger”, and from Los Angeles locals Bed with “Goodnight”.  Zombeavers hits theaters & Video On Demand on Friday, March 20, 2015.  If you’re in L.A. on March 18th, grab tickets for the Los Angeles premiere of Zombeavers here. 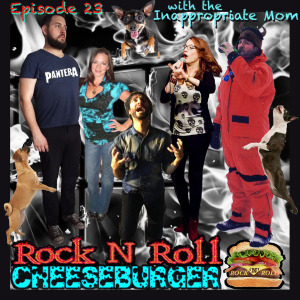 Nic “Inappropriate Mom” Fit75 joins us in Burgerville for our Episode 23 twitter party.

Rock N Roll Cheeseburger Episode 17!  Beard master & English major Bryan Cook joins returning guest host Celia Finkelstein as we get back to our burgery roots in our first new episode of 2015.  We crack beers as we talk Burger Technology,  Gross Selfies,  Sandwiches (DIFFERENT THAN BURGERS, YOU GUYS),  and Kyle kinda freaks out about Umbrellas a little bit.  We pump up the jamz with “Drones” by Ghost Idols,  and a saxophone-heavy tune called “In The Sunshine” by the Dirty Cakes band.  We revive one of our favorite to-dos with 60 Second Story Hour, and we hop around the terrible-radio-o-sphere in this week’s commercial parody segment, including some sweet mom raps!  Oh, and we may have stolen the bodies of Alex & Stu from Warp Drive for this week’s image.

Rock N Roll Cheeseburger Episode Eight!  YouTube funnyman Jason Horton grills up the comedy burgers with the gang, discussing:  Halloween Candy, Last-Minute Costumes, Ghosts, and Facebook Soapboxing.  We hear political advertisements from fake candidates Nancy R. Adams and Carl Zerptington.  And we rock some wild tunes from “Fire The Animal” and “Mudface“.  We revisit 60 Second Storyhour with a Halloween edition, including Dan’s “Tell-Tale Fart”.  Tune in next week for the Town Hall Debate with candidates Adams and Zerpington!  Until then, plug your burger into an amplifier & rock the cheese off.

Rock N Roll Cheeseburger Episode Seven!  Rock drummer and hilarious maniac, Manimal from The Big Surprise, joins us in the white-hot boozerdome as we talk: Willful Ignorance, Bar Etiquette, Water as a Commodity, Phone Envy, the Japanese McDonalds’ Black Cheeseburger and more.  We play a couple of rad rock jams from The Big Surprise with “Tomm Petty” and “The One”.  And we flip through just about everything that is wrong with terrestrial radio.  Episode 7 is lovingly fake-sponsored by Pimpin’Surance. 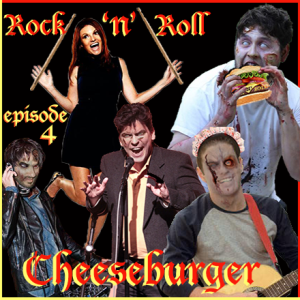 Rock N Roll Cheeseburger Episode Four! Greg Walloch joins the cast for the fourth installment of the burgerings. Featured in Ep. 4 are discussions on terrible airline passengers, domestic abuse & the NFL, “Orthorexia”, and the good kind of crazy, along with rad rock music from local basasses Living Dead Lights, as well as Rochester, NY’s own Starlight Cities.  Jackie, Dan, Kyle & Greg are all put to shame as Tikku hits the nail on the head with his Sixty Second Story Time, and a few things you might have missed on the internet.