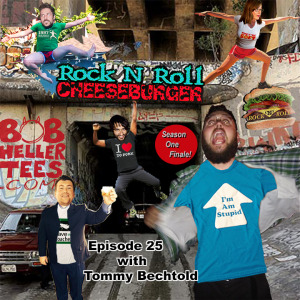 Season one comes to a close with returning mayor of maniacal musings, Tommy Bechtold!

Rock N Roll Cheeseburger Episode 25!  Tommy Bechtold spelunks into the burger dome for his third RRCB episode and our Season One Finale, and he brings Val’s mom with him!?  This week’s pressing issues in society are  Out-Of-Town Guests,  Unsustainability,  Bro-Night Stands,  and  Hangover Cures.  We have our first honest to goodness sponsorship this week, from the hilariously stylish folks at Bob Heller Tees!  We spin beefy rock tunes with Byron Blocker‘s “Echo Park” and Boom Said Thunder‘s “Modern Girls”.  And we dive into the perilous depths of co-hostess Valerie Tosi‘s mind in this week’s comedy sketch “Brain Date”.  Come hang with us at the New Orleans tweetup April 16-20, where co-hosts Dan Lawler and Valerie Tosi will be performing in the Comics Of Twitter stand-up show!  And we’ll be back inside your ear satchels after our spring break! 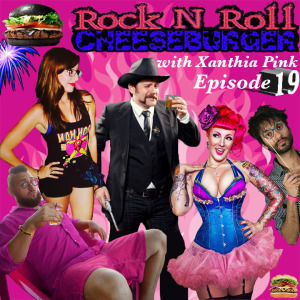 Rock N Roll Cheeseburger Episode 19!  Xanthia Pink is in-studio to paint Burgerville rouge!  Join Xanthia’s goddess energy and sit in as our round-table discussions cover these pressing issues in society & more:  Douche Bag stuff,  Goddess Energy,  Emojis,  Weekend Partiers…  Some guy from the 80s offers advice on how to suck less.  And connoisseurism meets medical marijuana in our sketch comedy segment this week.  We slam rad tune buggies in Ep. 19,  with “Velocitip” by Greg Byers,  and “Ten Tiny Fingers” by Marriages.  Get pinky with it, y’all. 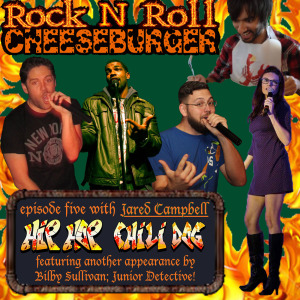