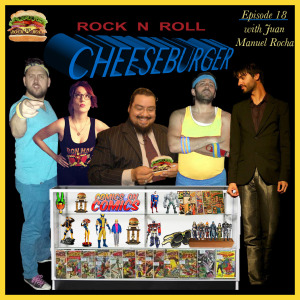 Rock N Roll Cheeseburger Episode 18!  Juan Manuel Rocha, host of the Comics on Comics podcast and general nerd overlord, grills up the nerdgasms in the Burger Dome this week.  We debate some pressing issues in society, including:  Dynasty fans, the  X-Files reboot,  Music festivals,  and Magic: The Gathering!  We distribute some rock musack to your ear buttons, playing a brand new release from Rock Burger favorites Monolord with their jam “Cursing The One”, and also a rad live track from Fat Elvis called “Fire At Will”.  Ep 18 is fake-sponsored by the kind & caring folks at the “Stríppumé” stripper résumé service.  And we present an hilarious fan-fiction crossover sketch called “X-Men Interviews”!  Just grab a burger, click play and thank us later.

Rock N Roll Cheeseburger Episode Three! Special guests, Stu & Alex of the musical comedy duo Warp Drive enter the burger dome, mandolins in-hand, and rocks the night away as we mourn the (temporary) death of one of our hosts. Featured in Episode 3 is a WORLD PREMIERE of Warp Drive’s new comedy song “Follow The Road”, an advertisement for all our dinosaur listeners, and round-table comedy discussions on cheeseburgers, super string theory, the cost of living, and Dinosaurs!  Send in your best burger & dinosaur pics on twitter &/or instagram to @RRCheeseburger!